Wrightsville Beach Long Board Association held their annual contest. The event was well attended as usual and there was some awesome surfing by everyone entered. Best part is seeing old friends and meeting new ones. The morning surf was ok to good but by the time finals were on, the tide killed just about any waves left. Our group all headed outside to wait for sets but nothing came. I gave it 10 mins then headed into shore break junk. It was ugly. Ate sand for 10 mins. I didn't catch one good wave. After our heat, I and the rest of our "Legends" group packed up and headed home. Mike Whitmore called later that night, I took first place. What a shock.

My daughter Kim went over to Mike's home to pick up my trophy. Here is what she FB posted:
My dads trophy for winning first place! I don't know surf or wave lingo, but if I understood correctly, the guy that made the trophy was telling me he rode the crap part of the wave & made it look really nice! Congrats Dad! xoxox 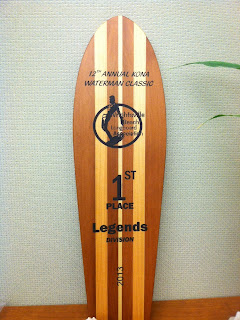 This was on my 9'10" woody Nose Rider. I was not the best out there during that heat, just the luckiest.
Dan