A discussion about rails 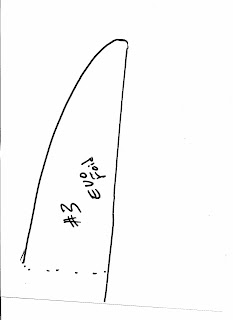 All our long boards have been using what Dennis calls Evo taper. Much like an Alaia,  they offer really good control that you can not get with foam. I've seen Bing's Silver Spoon nose rider and it has a softer version of our taper but we can get a much better defined, thinner taper with wood. On Dennis blog he wrote this about his design:

Rails make me happy. The tapered rails I've been surfing and building are the best. I'm reminded of this every time I get out in the water. It's a lot easier to manage my board when it doesn't have those fat boaty rails. You wouldn't think it'd make much of a difference but, it does.
Tapered rails work for me for two reasons. I think it's easier to catch waves because of the board's foil shape. The only way to get that shape is with tampered rails. What I like best though is having better rail control when dropping in or turning. With a fat not so tapered rail, it's a lot harder to feel that rail. The shape of the bottom also makes a huge difference. I like some belly in the middle, nose concave and vee in the tail. Those features work better for me than a board with a flat bottom.
Ok, that's how it works for me. I love my evo and the nose rider is going to be even better. All you guys that have to run to the nose to stay in the wave know what I'm talking about.
D.
http://dirtycrowssurfboards.blogspot.com/2010/09/its-all-about-rails.html

I'm not a big wave chaser, sort of been there, done that kind of mentality but I took an Evo railed 8'4" Mini Mal out at Ocean Isle Beach pier. Took three good waves and found this foil to work really well on over head surf. It give good rail bite and really good edge control. As Dennis states it works equally good with a nose rider profile.