9'4" Evo nose coming together. For those who have never made one like this, some background. First time I saw this was on one of Hap Jacob's longboard around '63 in his shop on Pacific Coast Highway (PCH), Hermosa Beach. Redwood and probably Balsa.

By now I've glued up enough Cedar and Balsa strips to make a 2"x20" board. With a planer, all sides are trued up. Next is to make a bunch of test cuts on scrap wood to get the center angle perfect.

Then gluing each to board while trying to maintain an angle w/o gaps. The best clamps to use is lots of duck tape...lots. 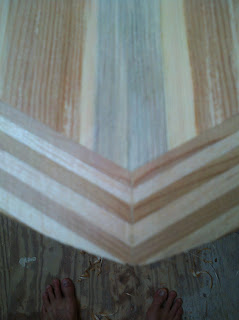 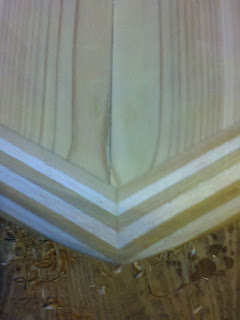