On Sunday afternoon, Amy Crocker called to tell us Chris passed away on Saturday. He had a heart attack.

Now Chris is truly the kind of guy who would give you the shirt off his back. He was a great father to Brittney and Jake, and loving husband to Amy. He was always kind to everyone, even if he didn't agree with their politics. At the beach, he often took a good handful of Jake's friends with him surfing - was like father duck leading his flock to water.

Chris was the kind of surfer who would go out in any of kind surf, I've seen him take off on waves that were impassable yet he'd surf it well. Of course Jake would be ripping up whatever came in. Chris could shape boards and recently finished one for Jake. He loved to hunt, fish, clam, just about anything outdoors. Last year he stopped over with good 20 pounds of clams from our area. Darn good eating.

Last few weeks Chris didn't feel well but just ignored traditional heart attack warning signs. Last Friday night, after going out to dinner with his family, he felt worse. On Saturday conditions were getting worse and Amy took him to emergency center at our local hospital. Chris died on the way there.

There were many good reasons for Chris to have lived to an old age but few for him to have died so early.  Yet one comes to mind, us men can be stupidly stubborn humans and we think we are invincible. We are afraid to admit we have to ask for help like having to go to doctors, and we think we are super human.  I know, there is a fine line between always asking for help or ignoring situations. I think that if someone says you need to see a doctor, then the symptoms must be showing enough for others to worry. So pay attention to what people say about your health.

Today we had a Paddle Out for Chris. In true Hawaiian tradition, his friends came from far and wide to pay there respects in our unique way. Eastern Surfing Association, our Southern NC chapter, folks came also: Mary Ann Mangiacapre, Amy Rose, and Jesse McCrery, thanks for coming down, along with a whole bunch of fellow surfers. Our weather was absolutely perfect.  This was a perfect way to say good bye to Chris.

Here's photos from today. I'll edit some video and add it later.
Dan and Tom 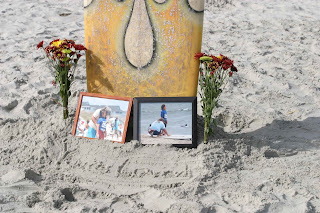 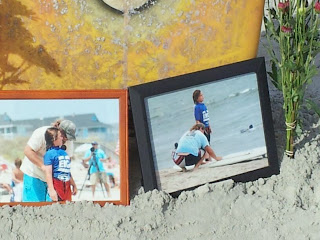 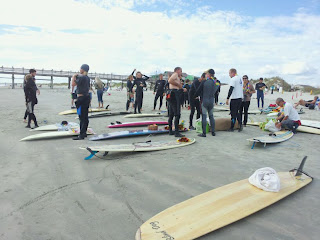 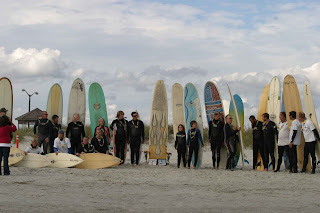 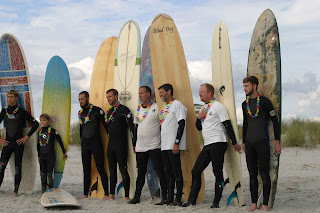 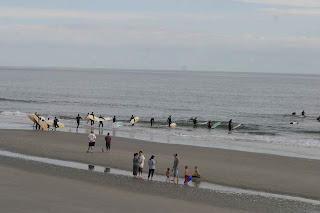 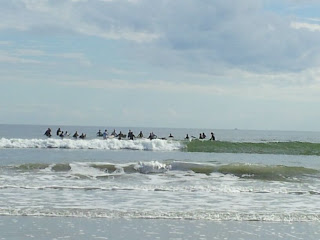